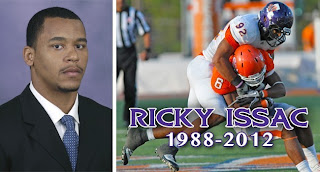 A Thursday evening memorial service will be held at the Natchitoches Events Center for the 2011 Northwestern State football team's Defensive Most Valuable Player, Ricky Issac Jr., a Natchitoches Parish Sheriff's Deputy who died in an on-duty auto accident Saturday.

A visitation at the Events Center will begin at 5 with the memorial service beginning at 6, under the direction of Winnfield Funeral Home of Natchitoches.

A funeral service will be Saturday morning at 11 in Newton, Texas, at the Newton High School gymnasium.

A December 2011 Northwestern State graduate, Issac is survived by his wife Akilah, a former Lady Demon basketball player. She is expecting a baby boy in the spring.

Issac, 24, was a native of Cypress, Texas, and a Newton High School graduate. He helped NHS to an unbeaten state championship season in 2005 as a junior.

At Northwestern, he earned four letters and was third on the team as a senior in 2011 with 63 tackles, 31 solo, as a defensive end. He had a career-best 10 tackles , including four for lost yards along with a fumble recovery, in a 23-10 win at Texas State in 2011, after starting the season with 10 stops in a home win over Delta State.

He more than doubled his career tackles total as he shared team Defensive MVP honors that season.

Issac was active in the NSU Huddle of the Fellowship of Christian Athletes. He went to work at the NPSO soon after graduation in December 2011, and served as the NSU football team's police escort for the 2012 squad's last two road trips to Central Arkansas and Stephen F. Austin.

He died from injuries sustained when his sheriff's department vehicle hydroplaned on a rural road in south Natchitoches Parish during a heavy rain Saturday morning, according to Louisiana State Police.