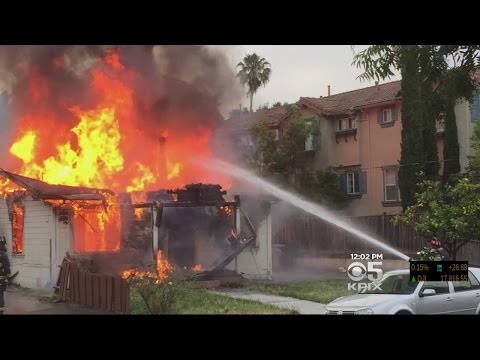 FREMONT, Calif. — The intense manhunt for a gunman accused of shooting two Fremont police officers came to a violent and fiery end early Thursday, when officers launched tear gas into a home the suspect was holed up in, which then erupted into flames.

When firefighters squelched the large blaze at the home on Roberts Avenue, police found the suspect, 44-year-old Santa Clara resident Gerald Villabrille Jr., dead inside a closet. The alleged gunman, who had an active bench warrant at the time of his death, is well known to law enforcement in the South Bay and has been in and out of jail for the past two decades, following violent run-ins with police.

“He was given a number of opportunities to come out during that negotiation, but he refused to do so,” Geneva Bosques, a Fremont police spokeswoman, said shortly after the suspect was confirmed dead at the scene.

Authorities on Thursday defended using tear gas that possibly destroyed the home and may have killed the suspect.

“In a situation like this, police surround the building, try to call out to the suspect and establish contact or communication,” said Alameda County sheriff’s Sgt. Ray Kelly. “If that fails, they do things like shoot tear gas or flash grenades, use technology like cameras or robots to see inside. The last thing is to storm the house or building. That’s the last resort against an armed suspect.”

Police later lifted a shelter-in-place order sent out around the Fremont neighborhood as residents collected themselves after a nerve-racking night when officers from two dozen agencies assisted going door-to-door in the hunt for the gunman.

Officers In Hospital
The wounded officers remained at Regional Medical Center in San Jose where one was in critical condition. The other officer was stable, Fremont Police Chief Richard Lucero said during a Thursday afternoon news conference. Authorities did not release the names of the injured officers.

The Alameda County coroner was working to determine whether Villabrille died as a result of the fire or from wounds he may have received in the gunfight with police.

“We do have reason to believe he was injured,” Bosques said. “We don’t know whether he was already deceased prior to the fire.”

The chaotic scene unfolded shortly after 1:30 p.m. Wednesday, when a patrol officer stopped a white 2016 GMC pickup truck with no front license plate and three people inside in a shopping center parking lot near Fremont and Washington boulevards.

The driver of the pickup backed into the patrol vehicle, pulled a gun and opened fire, hitting the officer once during an exchange of gunfire, said Bosques. The truck was believed to have been stolen from a car rental company in the San Jose area.

Police said they later took into custody a man and a woman, who were in the pickup truck with Villabrille at the time of the first shooting. They were not immediately identified, and it was not clear what charges they may face.

Flees On Foot
Villabrille fled on foot as responding officers chased him through a shopping center and onto city streets, and then into a home on Roberts Avenue. That’s where the suspect exchanged gunfire with police, wounding a Fremont detective, a 10-year veteran of the force.

Back at the scene of the attacks, police quickly set up a perimeter as tactical teams began going door-to-door scouring the neighborhood, while alerting residents by phone to stay put in their homes.

Schaa said he and his family were locked down overnight in his business, which is three doors away from the house that burned. He said that at one point, a police tactical team set up in his backyard.

Residents within a mile radius received what Bosques called a “Code Red” phone message urging them to remain indoors and call 911 to report any suspicious activity.

Authorities learned Villabrille had shot through the back-door lock of the home where the second officer was shot, and he was hiding inside. Around 11:15 p.m., police fired tear gas into the home in an attempt to flush him out.

Possibly Suicidal
But rather than evacuate, Villabrille — sounding despondent and possibly suicidal — called 911, saying he had a hostage, Lucero said. But police determined he was lying and around 2 a.m. after further negotiation, during which Villabrille fired a shot in the home, tactical teams fired more gas into the residence.

“We believe the gas ignited a fire, which firefighters made numerous attempts to extinguish,” Lucero said.

Police Move In
But under the threat of the armed-and-dangerous suspect, firefighters battled the blaze, which whipped up into a fully involved inferno, from engines parked on the street. By 7:30 a.m., they appeared to get the upper hand on the flames, and police moved in.

Officers found Villabrille dead in a closet along with the gun believed to have been used in the attacks. A small dog belonging to the family renting the home perished in the fire, Lucero said. That couple were not in the residence when the suspect forced his way in.

Wednesday’s episode was not Villabrille’s first encounter with law enforcement. His rap sheet of more than a dozen cases in Santa Clara County includes charges as recent as 2013 of being under the influence of drugs, narcotics possession, weapons violations and providing false information to police.

Sent Back To Jail
He’s been paroled and returned to jail scores of times dating to the mid-1990s for crimes such as assault with a deadly weapon, and being a felon in possession of ammunition and carrying a loaded firearm.

On at least two other occasions, Villabrille was charged in connection with evading San Jose police. In July 2010, officers used a stun gun while arresting him when he tossed an icepick and hypodermic needles out his car window while fleeing police, Santa Clara County Superior Court records show.

Then in April 2011, while on parole for a weapons violation, he ditched his drugs and ran on foot when he was stopped by officers. When the police caught him, he told them he had smoked PCP and methamphetamine before their encounter, according to court records.

Villabrille had an active bench warrant, issued two weeks ago, for his arrest at the time of Wednesday’s shooting.

His family in San Jose, who had been estranged from him, were left stunned by the deadly turn of events.

‘Out Of The Blue’
“I honestly don’t know what to feel,” Villabrille’s half-brother, Joseph Villabrille, 29, told The Chronicle Thursday. “It’s been years since I’ve seen him.”

He said he’d seen his brother only a handful of times when he “would show up out of the blue.”

Gerald Villabrille recently lived at a home on the 2400 block of Karen Drive in Santa Clara. His next-door neighbor, 59-year-old Joe Viorato, described the man on Thursday afternoon as “very nice” and “friendly with everybody.”

Viorato, who recently underwent a liver transplant, moved into the neighborhood five months ago and said Villabrille helped him carry boxes into his home. Learning his neighbor was the suspect in Wednesday’s violent episode was “shocking,” Viorato said outside his home.