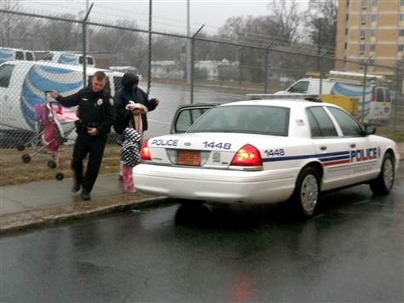 Officer Charles Ziegler was working security for a local church on Feb. 26 when he spotted a mother pushing her child's stroller in the rain.

He offered the woman a lift, and by that afternoon he was a bona fide Internet celebrity.

A photo of him helping the woman into his patrol car was posted on Twitter by the city's marketing and communications director and from there it took off.

WXII-TV picked up the story and after that, the story was passed around online.

Ziegler -- who was slammed with phone calls, texts and Facebook messages -- said that he still can't believe how far the story spread.

"My phone just blew up," he told TODAY.com. "Last night, I got a text message from someone I go to church with and she said I made the news in England."


He said the act was a regular occurrence as he's often at the church as parents are dropping their kids off at the daycare.

"It's me giving a lady and her child a ride. I don’t think it’s that big of a deal," he said. "Cops across the state and across the nation, they do stuff like this all the time."
Sign In or Register to comment.